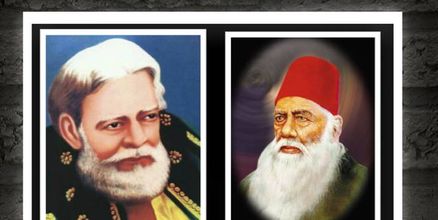 Story of an interview between Hazrat Waris Pak and Sir Syed Ahmed.

An interesting story is told of an interview between Hazrat Waris Pak and the late Sir Syed Ahmed. Haji Saheb happened to visit Aligarh. Sir syed on hearing his visit, sent a message to him requesting for a private interview , and he was asked to come in the evening. Sir Syed arrived late in the evening after dinner and knocked at the door. One of the servants inquired as to who was there? The visitor answered that it was Satan. Haji Saheb got the door opened at once and received him most cordially. The interview lasted longer than usual. Sir Syed complained that members of his own community called him a heretic or even a infidel. Haji Saheb rejoined that a Syed could never be a disbeliever in God and added – “ I am not at all opposed to English education, but faith, love and sincerity are the greatest essentials”. Haji Saheb was as popular with the anglicized youth as with the people of the older generation. English knowing men flocked to him by hundreds and sat at his feet. He was the first Sufi dervish who crossed the seas and visited Europe as he is also the first to have attracted the English class. His existence which covered the greater part of the century was practical protest against the supremacy of matter over mind and he represented a type of godliness and righteousness before which the disturbing forces of unbelief gave away. He used the following words: ‘’love is better than formal righteousness. My creed is love and a lover has no successor”.
(Note –This information was originally published in the form of a pamphlet in 1922 by Khan Bahadur Deputy Iftikhar Hussain Warsi of Kakori, on the personal request of Mr. Burns the then member of the board of revenue in the United Province of Agra and Awadh.)