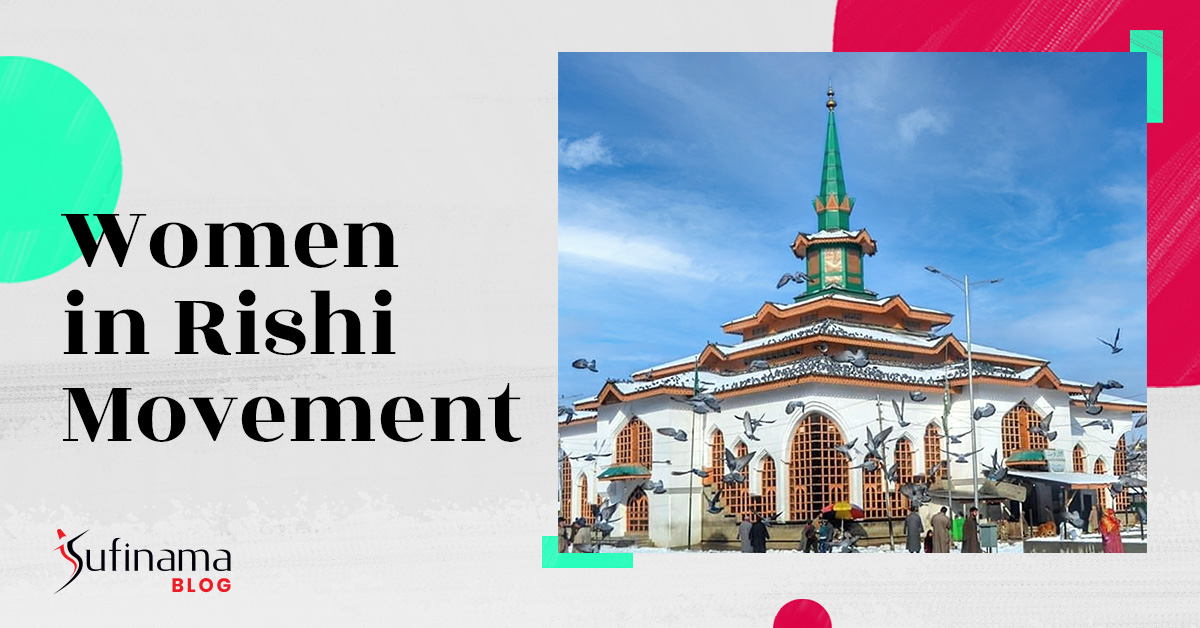 The two most notable Rishis who were to emerge in Kashmir during the onset of Islam were Nund Rishi and Lal Ded. Lal Ded who preceded the Sheikh was the first great saint-poetess of the Valley who left an indelible mark on the mental make-up of the Kashmiris and our own history. She was an experimentalist and her powerful expressions changed the course of her times. Though she was born in a Hindu family, she promoted monism and divinity in opposition to idol worship and precepts of duality. By a stroke of genius, Lal Ded was able to strike a fine balance between Islamic and Hindu concepts about life and divinity. Her systematized concepts were taken over by Hazrat Sheikh Noor-U-Deen Noorani and developed further in the name of the Reshut or Rishi movement, which has influenced and permeated almost all aspects of Kashmiri life, culture, arts, education, and folklore. Reshut is part of the collective subconscious of Kashmiris.

It is widely believed that Lai Ded had her sights fixed on Nund Rishi right from his infancy. The tradition says that Lala breastfed the infant Nund Rishi after he refused to have his mother’s feed. By breastfeeding, Lila is believed to have in fact given bountiful divine enlightenment with every gulp that Nund Rishi took from her. Lala was a wandering ascetic, engaged in constant spiritual introspection. She had thoroughly examined the world around her and abandoned her earthly comforts for the realization of the ultimate. She broke away from worldly attachments with the fire of her divinity. She turned to poetry to express herself in what has come to be known as ‘Vakh’ style, a poetic form of expression, which largely remained unbroken and was continued by all the Rishis subsequent to her departure.

Sheikh Noor-U-Deen Noorani, popularly known as Nund Rishi also adopted the poetic form of expressing his great spiritual ideas and discourses. This tradition was continued by notable saintesses Sham Bibi, Dahat Ded, and Behat Ded. Lal Ded, however, was the most renowned of ours saintesses, excelling everyone else in thought, content, and style. Kashmiris rightly call her their spiritual mother. It was because of her influence that Sheikh Noor-U-Deen Noorani, towards the end of his life, took some women saintesses in his circle of disciples.

Among the earliest of saintesses was Nund Rishis’ mother, popularly called Sodur Mauj. All we know about her is that she was married to a shepherd. She became a widow at an early age and was subsequently married to Sheikh Salarudeen, Nund Rishi’s father. The marriage was brokered by Samnani Baba Saman Rishi. However, our historians have hardly done any worthwhile research on the later part of her life, the kind of relationship she had with her son Nund Rishi and her ultimate fate.

The other woman saintess after ‘Sodur Mauj was Nund Rishi’s wife ‘Zai Ded’. She was the daughter of Warm Akbar Deen, a rich man of village Tral. She gave birth to two children.

Another saintess, Sham Bibi, was among the earliest of Nund Rishi’s disciples. It is said that while she was on her way to her in-laws-house in village Honchipora Khag, in a palanquin, she suddenly came across Nund Rishi, whose mere sight of her evoked deep and devotional feelings in her. Something rattled inside her heart and she at once jumped out of the palanquin and fell on Nund Rishi’s feet and implored him to take her as his disciple. The Rishi tried his best to forbid her but she insisted frantically and threw her garments and ornaments.

Thereafter she was admitted by Nund Rishi into his fold. She devoted her whole life to spiritual pursuits. She ate wild celeries and jungle berries only and nothing else. Apart from several sayings attributed to her, she wrote the first elegy in Kashmiri on Nund Rishi’s demise. The first line of the elegy runs as –

Sham Bibi spent the latter part of her life with Baba Latif-U-Din Rishi. She was buried in village Poshkar.

Historians believe that Bahat Bibi and Dahat Bibi were the daughters of a patwari of Draygam and bad become Nund Rishi’s disciples at a very early age.

It so happened that while Nund Rishi was walking along a meadow with a stick in his hand, he saw two girls plucking wild vegetables. The Rishi advised them against plucking fresh vegetables because they were living things. The girls did not get convinced and mockingly told him that his staff must have been responsible for the death of a number of insects and other living creatures. On hearing the taunting remarks from the girls, he carried a long discourse with them, and soon thereafter, both renounced their homes and became his disciples. Bahat Bibi earned her own living and fed herself on barley only. She used to tell people that the existence of the body itself was an obstacle between the luminous soul and God. She was an embodiment of devotion. Her tomb is situated in village Zaloosa.

Most historians believe that she was the sister of Bahat Bibi. Others believe that she was her spiritual sister. Dahat Bibi was present at the historic meeting that took place between Hazrat Meer Mohmad Hamdani (RA) and Nund Rishi. Hazrat Meer wanted to know why Nund Rishi was so thin and frail. Dahat Bibi answered on his behalf and said, People in pursuit of the ultimate truth attach no importance to the body”. ‘Are you spiritually liberated’, asked Hazrat Meer of Dahat Bibi whereupon she replied that if she were not, she would not be a ‘participant in the august company of Hazrat Meer and Sheikh-ul-Aalam and would not be delivering answers? Hazrat Meer again asked whether she was a daughter or son (male or female). She answered that if she “were non-existent, she would neither be male nor female, meaning that the Rishi cult made no distinction between male and female because both are products of one enduring reality. The ultimate is neither he nor she. The dialogue between Hazrat Meer and Dahat Bibi is so long that it is not possible to reproduce it here.

Shang Bibi was a dancer of great repute. She was exceedingly beautiful and possibly a courtesan. It is said that some people induced her to pay a visit to Nund Rishi’s hermitage and tempt him with her coquettish behavior and dancing. They wanted to put Sheikh-ul-Aalam on the test. Shang Bibi obliged them and went to Nund Rishi’s hermitage at Nowshehra along with her troupe. She put up a splendid show but in the midst of her dance, Sheikh Noor-u-Deen asked her to stop and see her face in a mirror. She was stunned to see her countenance in the mirror as that of an old wretched woman. She fainted in horror and after being brought back to consciousness, wept at Noordeen’s feet. She renounced her dancing carrier and became a disciple of the great Rishi, and lead a strict ascetic life. She was buried adjacent to the tomb of Hazrat Sheikh Noor Deen Noorani at Chara-e-Sharief.

She was the disciple of Baba Shakoor Deen Rishi. She had a permanent physical disability and despite her illness, lived a complete ascetic life in a forest about eight miles to the North of modern Bandipora. It is said that she could ride on leopards. A disciple of hers was one day attacked by a leopard. Shang Bibi asked the leopard why it was attacking an innocent man? The leopard left thereafter without harming the disciple. Shang Bibi’s tomb is situated in Babtho.