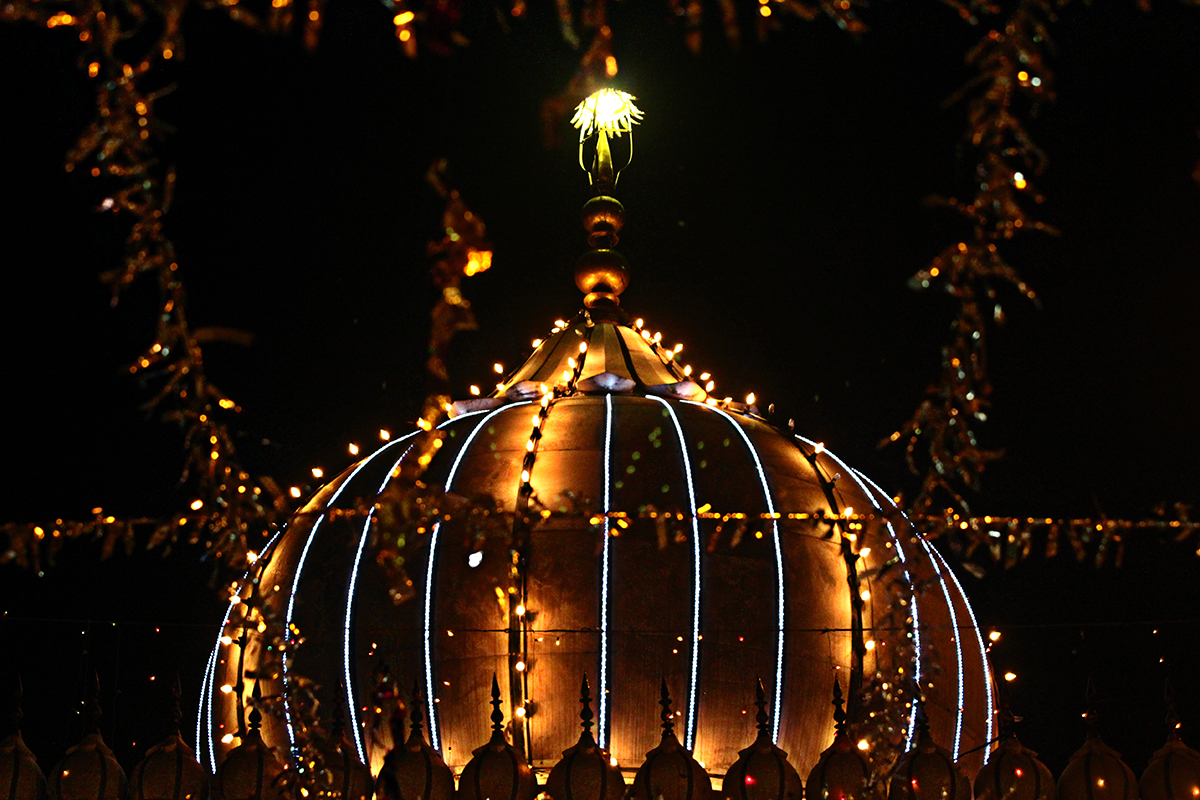 SUFIS have never been negligent towards their duty as preachers of high morals and spirituality. They have always considered themselves responsible for the reform of the whole of mankind, irrespective of caste and creed, race and religion, and have considered every community of the worlds as deserving of their love and compassion.

In the very early days of Islam, when the Ommaiyad rules, in all their tyrannical might, struck a hard blow to the Islamic way of life, the Sufi armed with their weapons of high spiritual character spread out in all directions to meet the challenge. In addition to their inspire teachings they possessed the invincible power of spirituality and it was this power that helped them in successfully overcoming the many physical and spiritual obstacles which came their way.

In so far as principles and beliefs are concerned, all the Sufis are in full agreement. However, due to temperamental differences and the varying requirements of time and place, they differ from each other in their ways of teaching.

The four peers and fourteen khanvadas of Sufis are well known. All the other Sufi orders are just their just their branches, These four peers are – Hazarat Imam Hasan. Hazrat Imam Husain, Hazarat Khwaja Hasan basri and Hazarat Khwaja Kumail-bin-Ziyad- all of them being direct disciples of Hazarat Ali, that great spiritual genius whom Prophet Mohammed called the ‘‘Door to the City of Knowledge’’. As pointed out earlier, all these patron saints, though fully agreed on points of principle and belief, nevertheless, exhibited a certain diversity in their approaches, and as a result, the many orders deriving from the also bear certain distinctive characteristics. These characteristics, though much modified by the temperaments of individuals in different periods and the requirements of time, are still recognizable.

A characteristic does not mean a quality which in not to be found in anyone else. Nor does it mean that it is the only quality possessed by an individual. However, if a certain quality in conspicuously present in some order as a whole, it can certainly be treated as a characteristic of that order.

Among the numerus Sufi Orders in India, the four most renowned ones are Qadiri, Chishti, Suharwardy and Naqshbandi. The Qadiri Order derives from Syed Muhiuddin Abdul Qadir Jilani and is characterized by its staunch Unitarianism and its emphasis on the imperative need of absolute surrender to the will of God. The Suharwardy Order was founded by Sheikh Shahabuddin Suharwardy, the author of ‘Avaraf-ul-Maarif’, and is characterized by its stress on truth and sincerity. It also excels others in its practice of zikr.The Naqshbandi Order follows from Khawaja Bahauddin Naaqshbandi Bukhari and is renowned for its strict adherence to the shariya- the Islamic Lay. Though the first Sufi to bear the Chishti appellative was Khawaja Abu Ishaq Shami Chishti, who was a disciple and follower of Khawaja Hasan Basri and could trace his relation to him through six different orders, the credit of introducing the Chishti Order to India and making it popular goes primarily to Khawaja Moinuddin Hasan Sanjri. Moreover, the many brilliant luminary which appeared in this Order in this country made it all the more popular. One of these great saints was Khawaja Mohammed Nizamuddin Badayuni, who was undoubtedly an extraordinary and exemplary figure and can rightly be called the top blossom in this colorful bouquet.

The other Sufi orders had usually such Muslims as their adherents, who although acquainted with the exoteric aspect of Islam, were, however, sadly lacking in truth and sincerity of character. They had usually such communities as their neighbors, who were even more ritualistic than them, but to whom the higher value of Islam had a familiar ring. Having lived together with the Muslims with for quite some time, they were no longer total strangers to Islam. However, with the Chishti Order the case was somewhat different.

When Khawaja Moinuddin Hasan came to India he had to deal with a community which had a grand spiritual and cultural past, and which even in the present, had kept up its old traditions. They were acquainted with spiritual philosophies and inner power in one from or the other and believed in one God. However, whenever they came across something outlandish, they took it for a manifestation of the divine and started worshiping it. In such a community only, that person could gain popularity who could win their hearts with his extraordinary moral excellence. Hazarat Khawaja had all these qualities. Besides, he had the additional qualities of altruism, tolerance and love, which so quickly overcame the barriers of language, culture and religion and won the hearts of an alien race. This very altruism and love of mankind is the characteristic of the Chishti Order.

Hazarat Khwaja decided to settle down at Ajmer, which, in those days was the capital of the great Rajput King, Prithivi Raj and, therefore, also a center of art, learning and culture of the times. Very close to Ajmer is that famous tank of Pushkar, with the only temple of Brahma in existence, which is a great pilgrimage of the Hindus. If a goring Dervish with no material power whatsoever and a religion and language altogether aline, had not been the very incarnation of spiritual power and love, it would have been impossible for him to settle down at such a place and to achieve such an immense popularity with the masses.

It was this very Dervish who once remarked: “God is a fried to those whose generosity is like that of their river, whose benevolences are like that of the sun and whose hospitality is like that of the earth”! In other words, which is the same for friends and foes alike. When Hazarat Khwaja snet Qutb-ud-din Bukhtiar Kaki to Delhi as his emissary he advised him thus: “Whoever shows enmity to you, treat him as a friend and don’t ever hurt anyone”2. The History of the Chishti saints is full of such events which clearly show their deep love for mankind, irrespective of caste and creed, their extra-ordinary sympathy for the downtrodden, their tenderness of heart and their lofty indifference to power and pelf and to the rules of the time. Perhaps, it will not be out of place to relate here a few of these anecdotes.

Among the Chishti saints, by far, the most prominent figure is that of Hazarat Nizamuddin Auliya who combined in his person all the best characteristics of the Order. The amount of literature available on him also far exceeds that on any the siant. Innumerable persons received grace and guidance at his feet. In fact, all the miraculous qualities of heard and heart which Ameer Khusrau possessed were the result of his teachings and grace.

Khwaja Nizamuddin had such a tender heart that whenever he heard some mystic couplet his heart grew heavy and tears came to his eyes, but in such a way that nobody present knew about it. The disciples at his service used to pass on to him handkerchiefs, one after the other, to wipe off his tears. This is how people came to know that the Master was weeping. The high value which he placed on tender-heartedness can be well imagined from the following words of his: “On the Day of Judgement when I would be questioned as to what I have brought from the world, I would reply-“the flame of tenderness which burns in the heart of this Turk (Ameer Khusrau)” 3.

Hazarat Nizamuddin once remarked: “prayer is of two types. The first which benefits only those who pray, such as kindness, benevolence, sympathy, etc., and the reward of this is immeasurable”. There is another saying of his on the subject: “In Doomsday’s mart nothing would be so precious and so much in demand as sympathy and considerateness for other”.

The Hazarat Nizamuddin was in the habit of fasting every day. In he evening he took no more than a few morsels and very often in the mornings too he did not take anything. When his disciples requested him to have something more, lest he grew too emaciated, tears came to his eyes and he used to remark:

“Don’t you know how many people are there, lying hungry in the shops and mosques at this very hour, who haven’t had anything to eat for days. How can this food go down my throat?” At this the disciples had but to remove the food.

One day the Saint was having his afternoon siesta. In the meantime there came a dervish whom the attendants of the monastery turned away. That very day the Saint saw his master Baba Farid in his dream saying: “if there is nothing in the home, at least treat your visitors well. Who told you that such a broken hearted man should be turned away like this”. After this happening, on getting up from his siesta, the Saint invariably asked two questions: “Has the sun set?” (that is to say has the time for evening prayer arrived) and “Have there been any visitors?”

Another important characteristic of order is its open-heartedness and tolerance towards other religions. Once when a Hindu prince from Deccan was guest at his monastery, the food was served to all present in separate dishes, so that the prince may not feel that only he had been served separately (eating out from the same plate being against the custom of the Hindus). A Maulvi objected to this, at which the Saint quoted a verse from the Quran, which means, it hardly matters whether you eat separately or together.

It is a very significant fact that in those days when the ruler of Delhi was deadly against the Sheikh, and the practice of Sama, which had been a very common practice with the majority of the Sufis all over the Islamic world, had become a matter of bitter controversy for which the Ulemas of the time had been called to the court for discussion, Hazarat Nizamuddin celebrated in his monastery the purely Hindu festival of Basant. Even to this day this festival is celebrated in all the monasteries of the Chishti Order particularly in the Dargah Sharif at Ajmer where, the following spring song written by Shah Niyaz Barelvi is sung with great gusto: –

Hazarat Ameer Khusrau was the most favorite disciple of Hazarat Nizamuddin. For Year he received training and guidance under the Sheikh and it can rightly be said that Khusrau was the very soul of Nizamuddin made articulate. The moral teachings found in the writings of Khusrau and the feeling of fraternity found in his behavior towards the common man are ample proof of the characteristics of the Chishti order which he so deeply imbibed at the feet of his master. He says:

(O man! You look down at the Hindus for their idol worship! Do learn from them their deep devotion.)