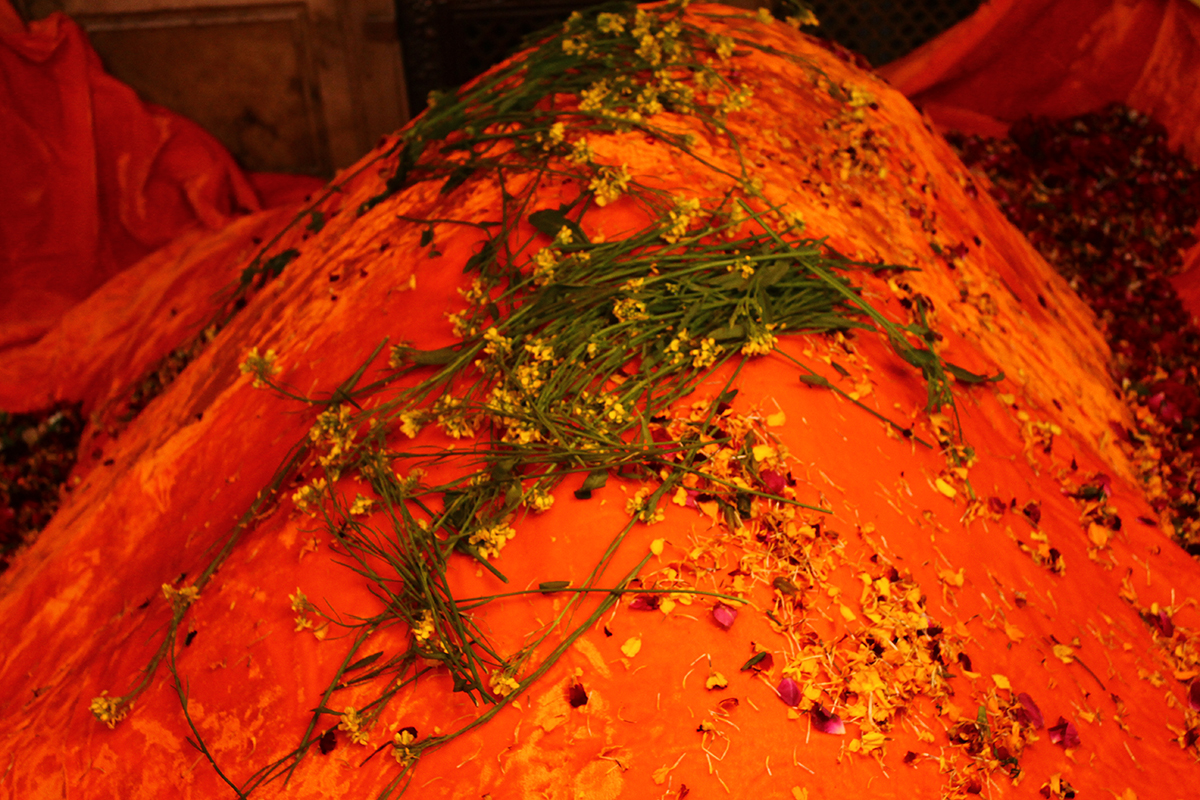 Basant means a lot to me. The flowers, the music at Nizamuddin Aulia Dargah in Delhi. I can smell the flowers from my Bangalore living room, can hear the strains of Qawwali. Hundreds of years ago, Amir Khusrau had started this tradition dressed in yellow saree dancing in front of his beloved Master Khwaja Nizamuddin Aulia who was grieving the untimely death of his nephew. He had succeeded in his Master breaking into a thin smile after a long period of mourning. Did Khusrau depict the same incident which he had seen near his Master’s Khanqah, situated near the modern day Humayun’s tomb? I was listening to Khusrau’s “Phool rahi sarson sakal ban” and could almost visualize the lyrics. “Tarah tarah ke phool khilaye, le gadhva hathan mein aaye”, the women dressed at their best in yellow, carrying the choicest flowers and garlands in their hands, walking to their place of worship, a temple where they would please their goddess with their music and dance. Khusrau didn’t think twice to replicate this best practice. In the era of Mergers, Acquisitions, Accusations & Start-ups, closures, hook ups & break ups, we actually think before sharing a best practice from a neighbor. It took me to a strange event couple of years back. I was a regular at the Dargah, I had landed late that night in Delhi. I had reached the dargah pretty late, almost 2 at night. It was a wintry night. I left my shoes at the dargah entrance, had kept the socks on. I walked up to Khusrau’s tomb, prayed for some time and then slowly entered the royal courtyard. The lights were on, I parked myself on the floor, started humming Khusrau’s ‘Mohe apne hi rang mein rang de’ while tapping my palm on my knees. Suddenly a female voice joined me in a duet. She was a trained classical singer. Clad in a yellow long formal jacket, the girl worked in a then leading airline as a cabin crew. We completed the song, then moved to the iconic “Phool rahi sarson”. She was naturally melodious, I was struggling to match her prowess. At one point of time she had her eyes closed, rendering a perfect kalam of Khusrau. Her yellow outfit, and sheer melody transported me to the era of Hazrat Nizamuddin Aulia, spreading Ishq, Aql & Ilm in the Delhi Sultanate.

We wrapped up our impromptu performance after a full throated “Rang” that night. We embraced for a few brief seconds in the divinely lit courtyard. I took an Uber to Gurgaon, and dropped her at her serviced apartment on the way. We are still in touch, and our telephonic duets are on, mostly Sufi kalaams. She is originally from Lucknow & is a trained classical singer, had joined the airlines two years back. She had broken up with a young pilot and was a regular at the Dargah. She used to sit for hours in the courtyard in between her flights, almost every weekend. When the Airlines had closed down its operations last year, she was out of her job. I had received a call from her the day she deplaned her last flight to Delhi from that airlines. I called up a friend of mine in another airline, fortunately she had an opportunity in her team for a grooming & poise trainer. She recruited the girl within a week & she proved herself before the year had ended.

Few minutes back, I received a video call from her from the Dargah, the qawwals singing a zesty “Hazrat Khwaja sang kheliye dhamal” celebrating Sufi Basant. I was extremely happy for her, a once upon a time stranger, now a friend. As Suman Mishra of Sufinama says, “Hum Nizamwalon ke baat hi kuchh aur hain.”