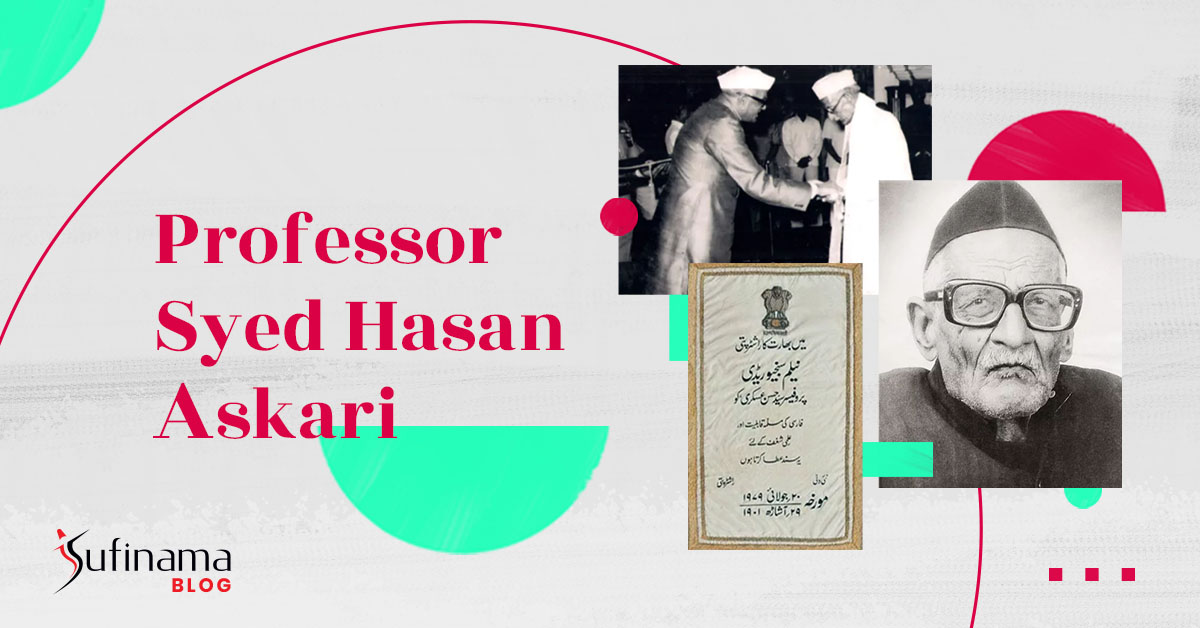 Professor Syed Hasan Askari was a distinguished historian and eminent scholar of medieval Indian history, active in his field between 1926 to the year of his death in 1990. He gained international recognition as one of the foremost authorities on the Delhi Sultanate, the Mughals in addition to mystic literature of Indian Sufis. His knowledge of Bihar’s medieval and early modern history was almost encyclopedic. Prof. Askari was unrivaled in his knowledge of original Persian sources and considered most learned scholar of Persian manuscripts.

Professor S. H. Askari’s research encompassed a wide range of subjects including medieval Sufism, the Delhi Sultanate, the Mughals, Bihar’s regional history, and other aspects of cultural and social history between the 12th and 18th centuries. Professor Askari authored more than 200 research papers, edited historical volumes, and translated Persian manuscripts, which have been published in 20 books and hundreds of journals and proceedings.

Professor Syed Hasan Askari had the distinction of receiving awards from three Presidents of India:

1. His Excellency Gyani Zail Singh, the then President of India, awarded the Padma Shri to Professor Syed Hasan Askari in 1985. Padma Shri (also Padmashree) is one of the highest civilian awards. It was given to Professor Askari in recognition of his distinguished contribution to education and literature.

2. His Excellency Neelam Sanjeeva Reddy, the then President of India, presented Professor Syed Hasan Askari with the President’s Certificate of Honor in 1979.

3. Professor Syed Hasan Askari was presented the Ghalib Award 1974 in recognition of his stellar research work in 1975 by His Excellency Fakhruddin Ali Ahmad, the then President of India.

4. The late Shah of Iran invited Professor Askari and his wife Mrs. Salma Askari to attend the 2500th year of Persian Monarchy in 1971, but he could not attend due to illness.

Syed Hasan Askari was born in 1901 to a middle-class Zamindar family of Kujhwa in Saran district in North Bihar, now called Siwan. Hasan Askari was the third son of Janab Syed Razi Hasan and Raziat Fatima, whose ancestors settled there in the middle of the 18th century. Askari Sahib was married to Ummah Salma in 1926. They had three sons and four daughters. Two of his daughters are settled in Karachi, Pakistan, while the rest of his children live in India.

Askari Sahib showed early promise when he secured a 1st Division and a District Junior Scholarship during his matriculation examination from Chapra Zila School, Bihar, in 1918. He went on to receive his B.A. (Honors) from Greer Bhumihar Brahmin College (now Langhat Singh College), Muzaffarpur, in 1921. He received an M.A. in History from Patna University in 1924, and B.L. from Patna University in 1925. In 1967 Magadh University conferred upon Prof. Askari the degree of Doctor of Literature (honoris causa). In 1984 Patna University also conferred on him an honorary doctorate.

Professor Askari started his academic career in 1926. He was President of the Medieval India Section of the 10th Session of the Indian History Congress in 1947, was made Head of the History Department, Patna College, in 1950, became Honorary Director of K. P. Jayaswal Research Institute (1962-1969), and received the title of Honorary President, Regional Records Survey Committee, Bihar (1981-1988). He additionally served as an executive member of several research committees, editorial boards, academic institutes and organizations.

Professor Syed Hasan Askari passed away at the age of 89 in Patna, India on November 28th, 1990.