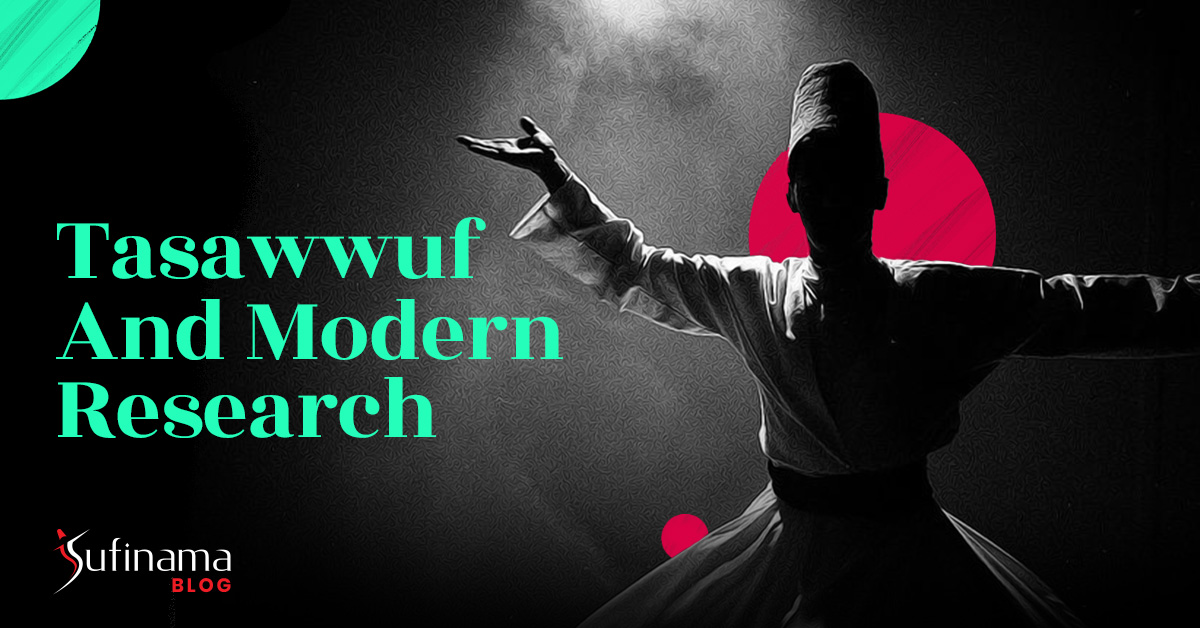 In Tasawwuf, the Dhat or Reality of God is first assumed and manifestations arc traced down, till Man or more correctly ” The Perfect Man ” is reached—or in other words, the manifestations of the activities of the cosmos are traced down from the Self as opposed to Self being the co-ordination of the activities of the cosmos as experimental psychologists hold. This tracing is called ” tanazzul “. The successive downward stages are technically called Ahdiyyat, Wahdat, Wahdiyyat (the three internal stages), Arwah, Amthal, Ajsam(the three external or manifest stages)- There are the six Days in which the world was created according to Genesis Chap. 1, and according to the Quran Inna Rabakum Allahu Iladhi Khalaqas’ Samawati Wal Arda Fi Sittati Ayamin Thummas Stawa ala’l Arsh (Suratul Araf, VII-54)”

“Surely Your Lord is Allah Who created the heavens and the earth in six Days, then lies mounted the Throne “.

Man has to ascend through all these stages up to Ahdiyyat when he appreciates Dhat, which is the goal of his existence. This is his ‘Uruj or ascent. This is either in his knowledge or fancy. Then he descends again in the very same way to his own place for the reclamation of humanity as in the case of ” men of God ” (ahlu’llah) and prophets. The utmost that scientists do is to prove that the world was created and the Creator is a moral being, who loves the world. All we have to do is to become loving towards His creatures and assume ” the attribute of God ” a phrase used by Emmanuel Kant though very common among the Sufis who would say Tukhalliqu bi akhlaqi’llah (Clothe yourself with the attributes of God).

The highest form of love to God finds expression in His adoration and worship Wama Khalqal jinna wal insa illa liyabudun (Surat-uz-Dhariyat L. 1-56) ” “And I have not created the Jinn and men except that they may worship “. Love towards man is the Kinship of Spirits, which, according to a Hadith quoted by Hazrat Aysha, is formed in the prenatal spiritual world-

By loving and worshipping God, man’s nafs attains to the stage of Mutma’inna which is addressed thus:

“0 soul that is at rest return unto thy Lord, well-pleased (with Him) and. pleasing (unto Him).  Enter among My servants and enter into my paradise.”

The philosophers who go from bottom to top, argue from design, the design that has manifested itself in the evolution of the Universe. It is not merely natural selection and survival of the fittest, which nature carries out without any goal in view. There is actual design in nature e.g. the storing in the gall-blader of the bile manufactured in the liver till it can be conveniently emptied out. “It is difficult to say on the selection hypothesis how such an organ arose in which mere convenience is the sole end “, says the Rev. Vicar Best. In the beginning was Unity, a solitary germ-cell, the egg was represented by a solitary germ-cell and it gave rise to all the complex organs and faculties of an animal in its manifestation. Multiplicity did not coordinate itself into Unity. From Unity manifested Cosmos—God put himself under limitations of His own will for some ulterior purpose. Next to Cosmos comes Psyche, the seat of consciousness and memory and then the natural body. This is the tannazzulat (the evolution theory) founded by John H. Best (a) He, however, did not expatiate upon the connecting links as Sufis do.

His Psyche is the storehouse of memories; the future is constructed out of these memories, as in the case of an offspring that derives its qualities from both the parents. “Memories” are not destroyed, because the brain, this merely material mechanism, happens to get out of gear or fall to pieces at death (Best p. 32). The conglomerate Psyche corresponds to the world-soul of Plotinus of Alexandria, which is perennially conscious of its past, or to the Ruhi ‘Azam of the Sufis, as Maulana Rumi puts it-

Differentiations are in animal souls

The human soul is one individual.

Thus memories exist independently of brain cells. The third eye of man,  which was connected with the Psyche, his past memories, and the future developments connected with them, has now sunk into the brain and become his pineal gland. This is the oculis cordiale of the ancient German Saints. To mark its former place the Brahmins put on a namum on the forehead.

Anatomical physical facts show purposiveness, says Vicar John Best. (Page 399). “Neither the Darwinian gemmules nor Weisman’s Ids nor Mendelian laws have succeeded in clearing up the mystery how simple germ-cells manage to develop into higher organized adult individuals.” Hence the existence of an invisible entity of a mental order has been postulated by Mr. Best viz., Psyche. This Psyche corresponds to the subliminal consciousness of  F. W. H. Myers who was of the band of Cambridge savants who founded the Society for Psychical Research in 1882. The Sufi, however, sees the ism(name) of God, Al-Hakim (the wise) permeating the totality of the manifestation of cosmic developments. God’s Wisdom is not obvious at the outset or on the outside, just as the brush-strokes of a painter on the canvas may not be intelligible at first sight but become so as the painter’s work reaches completion. The Persian Poet is not therefore wide of the mark who said:

“The ocean has billows of its own

“The straw on the crest thinks it is struggling with it.”

“Not a sparrow shall fall on the ground without your father”

Not an atom Moves except by the command of Allah ” says an oft-quoted hadith. From Psyche, innumerable Psyches have emanated, which are under the direction of a fully conscious superior Intelligence. Psyches correspond to the Nusma envisaged by Shah Waliullah Sahib of Delhi and made mention of in his Hujjatul Balighah, The Psyche works on life. Life according to the theory of abiogenesis generated spontaneously on the earth—Kelvin thought that it was brought down on to the earth from a meteorite, millions of years ago. Arrhenius put forth his theory of Panspermia, that the whole universe is pervaded by a countless host of microscopic germs (Best 429). In the Sufistic catalog, life is the concrete manifestation of the aspect of Is-ness of Existence of God, which is one of the four primary aspects or hypostasis (itibarat) of the Dhat. According to Bishop Marcar, “It sleeps in the inorganic world, stirs in plants, awakes in animals and comes to self-consciousness in man.” (Mystery of Life p. 20). “There was gradual procedure from inorganic to organic matter through stages of gradually increasing complexity.” Organic evolution is complete in man the microcosm of the macrocosm, intricacy, and delicacy of the organic world has become most manifest in him. He, being the “image of God “, has to ascend to his source. In him alone spiritual evolution begins. Hence his spiritual powers alone will develop and not his body (Best p. 472). This ascent consists of making our Will subject to the Will of God. “The purpose of God “, says the Revd. Mr. Best, ” is a moral one, bringing beings like ourselves into existence, who should be able to choose between higher and lower impulses, and who, by choosing the right, should gradually bring their wills into conformity with His Own.” (p. 527). Hence Muhammad called himself ‘abd (slave) of God. A slave extinguishes his will and follows the will of his master, and hence also Islam is submission to the Will of God-extinction of one’s will in His Will. In bringing our will in the first instance into conformity with His Will, there is self-sacrifice on our part which entails a considerable amount of suffering, and hence the place and value of suffering in man’s life. “And I, if I am lifted up,” said Christ “shall draw up all men unto me.” Through suffering man advances toward perfection to become the image of God that he really is, as a perfect man. To go through suffering, some Sufis recognized three kinds of deaths:—Mauti Aswad or black death, which is suffering at the hands of others, mauti Ahmar or red death, which involves working contrary to carnal desires. mauti abyaz, white death, suffering from hunger. Hence also the injunction- “Mutu qabla an tamutu–“die before you die.”

The end of the evolution or tanazzulat is the production of the perfect man or as Mr. Myers calls it ” normal man” who according to him “has the fullest grasp of the faculties which inhere in the whole race ” (p. 20, Human Personality) or in the best products of the whole race as Saadi puts it in the case of the Prophet Muhammad,

The beauty of Joseph, the breath of Jesus, and the white hand of Moses.

Whatever the beloveds severally had, thou hast them all conjointly.

The Prophet had concentrated in him all the attributes that inhere in the choicest individuals of the human race.